Who Owns the Selfie?

So this monkey stole a wildlife photographer's camera, dashed away with it and took a bunch of pictures, including this really great selfie. 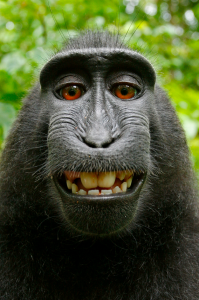 The story went around about three years ago (and I missed it somehow) but more recently David Slater, the photographer whose camera was swiped, requested Wikipedia to take the photo down, that it was violating his copyright. Wikipedia said no, it doesn't, the photo is in the public domain because a monkey took it.

If the monkey took the photo — and Slater is himself the source of the story that the monkey snapped the photo using his (Slater’s) camera — nobody owns the copyright; nonhumans cannot own copyright (or, as far as I know, personal property of any kind). Slater has no copyright claim, because the photo was not his original work – it was the monkey’s. But monkeys can’t own copyright. Furnishing the monkey with a camera no more gives him a copyright claim in the work than Microsoft’s furnishing me with a word processing program gives them copyright in what I write.

It makes sense to me. If, say, a friend of mine sees something awesome happening right that minute and grabs my camera to take a picture, do I own the copyright to that picture? I wouldn't think so. If he ends up selling the photo for $10K, I might want to have a discussion about rental of the camera [cough] but I wouldn't expect to argue over actual ownership of the copyright.

What do you think?

Thanks to Passive Guy for the link.