I have an SF story called "Me and Alice" in the new Alien Artifacts anthology, edited by Josh Palmatier and Patricia Bray. "Me and Alice" is about a young boy who's worried about his pet toad. Alice is very elderly (for a toad) and hasn't been feeling too well, but old age isn't something you can fix with care or medicine. An archaeological dig on his family's land provides a distraction, and a puzzle.

This anthology, and its sister book, Were, were funded through a successful Kickstarter campaign, and backers got mass market paperback copies. My trib copies were also MMPs, which is pretty cool; I've never had anything come out in that format before. Paper copies for sale now are trade size. 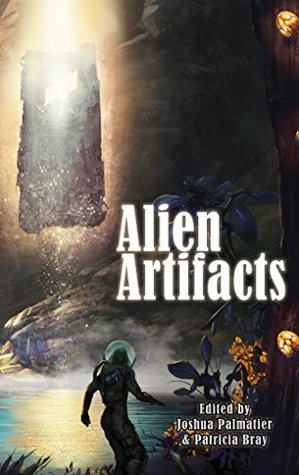 Josh and Patricia are also doing a Kickstarter campaign for their next batch of anthologies. This year they're doing three -- All Hail Our Robot Conquerors, Submerged, and The Death of All Things. They sound like fun; I'm especially looking forward to writing for Robot Conquerors, and maybe Submerged. And maybe Death of All Things too, but who knows? :) They've already made their goal, and have just a few days left, so you can pledge knowing that you'll definitely get whatever goodies you sign up for.
Posted by Angie at 1:01 AM