An anthology called Last Stand, edited by Dean Wesley Smith and Felicia Fredlund, just came out recently. I have a story in it, called "Bury My Son at Home," an SF story about the women determined to take their dead home in the wake of a horrendous battle, after two warring galactic powers used their world as a battleground. Last Stand is part of the Fiction River anthology series by WMG Publishing.

This was an especially fun antho to write for. Fiction River does Kickstarter campaigns every two years -- basically subscription drives -- and two years ago they tried offering a particularly cool high-level reward. Felicia Fredlund got the opportunity to co-edit an anthology with Dean, as a very hands-on class in how to do it, from coming up with a theme to writing guidelines to reading and choosing stories to putting together the TOC and writing interstitials and probably a bunch more stuff I don't know about 'cause I've never done it. The book is a very cool mixture of stories Dean liked, stories Felicia liked, and stories both of them liked. That last set was easy, but then they had to do some horse trading, of the "I'll agree to that one if you agree to this one" kind. (Felicia's the one who liked and pushed for my story. :D )

History offers many heroic tales of final battles. And in Last Stand, sixteen courageous authors offer their take on the topic. From a heartwarming tale of not-so-friendly business competition to a battle of the gods—sort of—for the fate of the world to a tale of looking for love in all the wrong places. These inventive stories make Last Stand one of the most creative—and memorable—Fiction River volumes yet.

"The Great Ice Cream War of Grover’s Hollow" by Annie Reed
"Slow Motion" by Eric Kent Edstrom
"Do Not Resuscitate" by Dory Crowe
"Sunset, Fall, Home" by Dan C. Duval
"'Til Death Do Us Part" by Kerrie L. Hughes & John Helfers
"Circle 'Round" by M. L. Buchman
"Unto the Ether" by M. E. Owen
"Bury My Son at Home" by Angela Penrose
"The Flare" by Laura Ware
"What’s Left of Me" by Bonnie Elizabeth
"The Counter" by Rob Vagle
"The Toymaker of Kelsium Rye" by Chuck Heintzelman
"Magic and Sacrifice" by Felicia Fredlund
"Lady Elizabeth’s Betrothal Ball" by Anthea Sharp
"Suppose They Gave a Ragnarok and Nobody Came?" by Lee Allred
"Death Bunnies of Toxic Island" by Travis Heermann 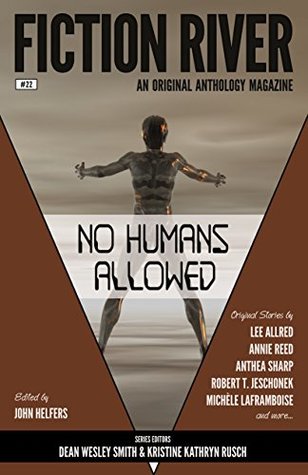 This sounds like my kind of antho. Going to check it out. I love the idea for your story

Yay! I swear I'll get me act together this week and send books for you to sign and Skittles as payment. *grin*

Suzan -- hey, whenever works. :) From like... I think the 22nd, something like that, I'll be at my mom's for a week, so if you don't get around to it in time to arrive before then, best if you wait and send it after Christmas.

Angie, who's got a deadline and is procrastinating :P