The Seattle Snowpocalypse of 2017

Okay, everyone in the Midwest or in Upstate New York or wherever is going to laugh or roll their eyes, but seriously, this is a metric buttload of snow for Seattle. O_O Jim usually volunteers to the Aquarium on Monday afternoons, but they've cancelled at least five busses already off the route he usually takes downtown, and he doesn't get off shift until after dark, so he's not going in today.

Last time we had snow like this was a day or two before Thanksgiving, a few years ago before he retired. He worked downtown and it usually took like half an hour, maybe forty minutes to get home on the bus. It took him over seven hours that day. He really doesn't want that to happen again, and I don't blame him.

We're supposed to get about a foot of it today, and it's got quite a lot to go. It's pretty, though.

This is out the front door, on the opposite side of the building, looking in either direction: 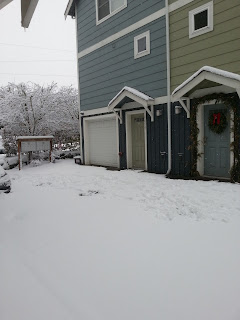 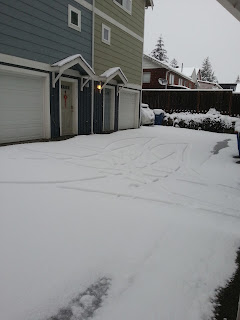 Yes, our neighbors across the driveway still have Christmas decorations up. I like it, actually -- it's cheerful. :D

And this is the view off our balcony. That's on the second floor, off the living room. (Yes, I know. Seattle's weird that way. It's hilly, like San Francisco, so there's not a lot of flat land left in the city. Newer construction tends to be tall and narrow. Our place is three stories, with the main living area on the second. When we were house hunting, we looked at one townhouse that was four stories. Kinda crazy, but it's what they do up here.) 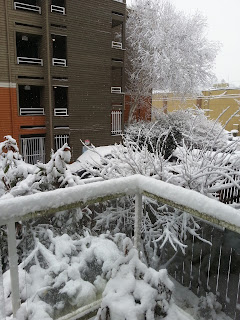 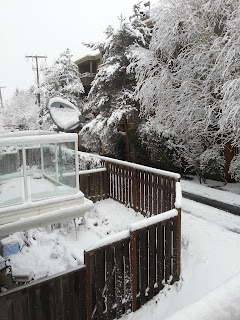 This is what our little yard looks like, taken through the screen door because I was feeling calorically timid when I shot this pic: 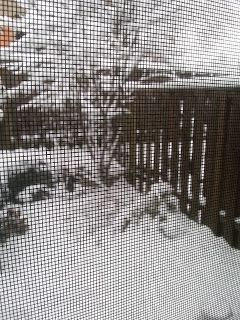 I'm here in the living room with my laptop, bundled up under a blanket and with the heater going. I think I'll be staying here most of the day.

ETA: a neighbor's kids built a snowman. :) It's pretty rare that there's enough snow here to do that. 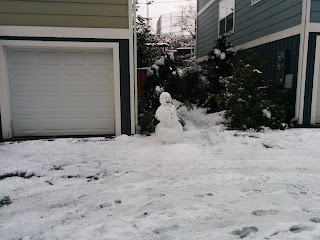 Charles -- it is rather picturesque, isn't it? :) Especially when you don't have to go out in it, which luckily I don't.

That's a decent amount of snow, but not enough to stop buses in the upper Midwest. :D Why did it take so long for Jim's bus that day? I remember you talking about it in email, but it was so long ago, I can't recall if I asked you: Doesn't Seattle have snowplows? o_O I mean, I get that it doesn't snow a ton all that often but still, you'd think the city would have some for such days when it DOES snow.

Sabrina -- no, Seattle literally does not have snowplows, or so I understand. They spread salt and stuff when it snows, and usually that's enough. It's only once every few years that they'd need snowplows, and that's not often enough to justify buying and maintaining a fleet of them. [wry smile] Also, Seattle is very hilly, just like San Francisco, and apparently that makes a difference too, somehow. (I grew up at sea level in California and know not of these things. :P )

A few years back, there was a snow-freeze day even worse than this last Monday. Traffic got snarled up to the point where people were abandoning their cars and walking away. People were stuck in traffic so long they were running out of gas, and had to walk away from their cars. Busses were getting stuck in these traffic snarls. It was taking them literally an hour or more to go a single block. Some of the bus drivers kept going for hours past what should've been their shift end, then said, "Sorry, I'm done," and left the bus and walked away. (Jim's driver stuck it out until he'd dropped off all his passengers, because he's a superhero.) And as the steeper streets got covered deeper and deeper in snow, which got driven on and compacted, then froze, there were a number of streets where cars/trucks/busses just started sliding down, and it was all, "Whee, car bowling!" (seriously, some people set up web cams and you could watch the livestreams) which caused clumps of wreckage at the next intersection, where the land had been levelled for the cross street, and so the clumps of clumped cars also blocked traffic. And most (but only most, not all [sigh]) drivers eventually figured out not to try these steep, frozen streets, so the congestion on the (kinda-sorta) passable streets got even worse.

Most of the hours of that day's commute for Jim were spent just getting out of downtown. Then by the time they got to the West Seattle Bridge (we live in West Seattle, which is a long penninsula-looking piece of land separated from Seattle proper by the Duwamish river), the bridge had iced over and had been closed to vehicular traffic. Jim said a bunch of people got off the bus there and hiked across the bridge; apparently they lived close enough that they thought they could walk home from there. We live a few miles farther down the penninsula, so Jim couldn't do that. The bus had to go down to the next bridge, which is a ways away, an even slower trip that evening, and then the bus driver made his way back up to where the bus route was supposed to go. At that point, IIRC, Jim said the driver was mainly asking people where they needed to go, rather than just following the whole route.

It was a huge, slow, iced-over mess, and Seattle is totally not equipped to handle it. :/

Okay, I'll snicker a little, but the really sad part is that you've had more snow than we have this winter. That is just not right!

Suzan -- that's most definitely not right. [nodnod] One of these two areas, either where I live or where you live, must be cursed. O_O