Some Really Stupid People and a Really Smart Dog

Usually when we laugh at graduation cakes, it's because the bakers got hilariously creative in their spelling of "congratulations." This time, it's because whoever decorated the cake, and whoever approved it, are both flaming idiots. 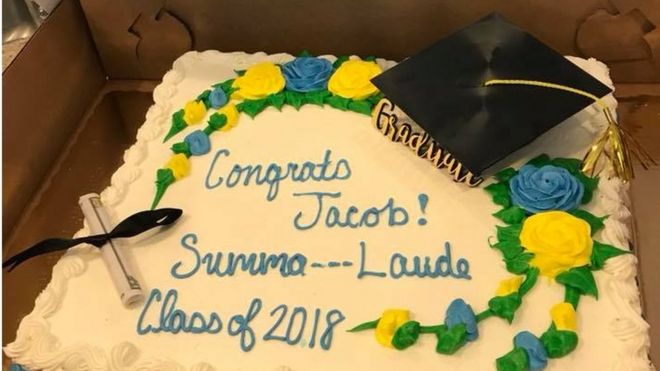 Poor Jacob was humiliated at his own party, and his mom had to explain to confused family members what the bleep was up with the cake.

At least, when she complained, Publix refunded her the $70 they'd charged her for the cake. Hopefully they'll send some employee training downstream about Latin versus cussing. [eyeroll]

But if there are some humans who are too dumb to walk and breathe at the same time, at least there are some incredibly smart dogs to balance things out.

A Columbian dog named Negro (that's pretty much the Spanish equivalent to naming a dog "Blackie" in English) has lived for the last five years on the campus of the Diversified Technical Education Institute of Monterrey Casanare. He belongs to everyone, or no one; the people there make sure he has food and water, and a safe place to sleep, and they play with him and care for him. He's basically the school's dog.

There's a campus shop where students go to buy themselves snacks, and sometimes they'll buy Negro a cookie. He's apparently been watching them do this for a while, and figured out how this whole "commerce" thing works. No kidding, he's figured out that if he picks up a leaf outside, takes it in and stands up to put the leaf on the counter, the clerk will give him a cookie. :D

If he actually did figure this out on his own, just by watching the students use money to buy things, this dog is seriously, like, the Stephen Hawking of canines.

The Dodo, linked above, says:

As you might expect, after the dog realized his money literally grows on trees, it's been a regular thing.

"He comes for cookies every day," Gladys Barreto, a longtime store attendant, told The Dodo. "He always pays with a leaf. It is his daily purchase."

She said they make sure he can only buy a cookie once or twice a day, since more wouldn't be good for him. Which is probably just as well. :)

This kind of restores my faith in the universe. If we humans eventually wipe ourselves out, it's nice to think that in a few million more years, the dogs might figure all this civilization out, and do a better job of it than we do.

I'll bet they wouldn't censor the graduation cake of a student who graduated with highest honors, at least.