I have a story called "Staying Afloat" in the current volume of the Fiction River anthology series, How to Save the World. It's an SF anthology, part of a new series of multi-genre anthologies. John Helfers edited this book, with Dean Wesley Smith and Kristine Kathryn Rusch as the series editors.

This is the story I wrote for one of the workshops back in March, and it was awesome to get my trib copy, especially since this is my first pro-level publication. While travelling in Mexico, I saw fields on hillsides so steep I wouldn't want to have to climb them (even when I had two good knees) much less establish crops there. It made me think about what would happen if the annual rainfall doubled or tripled or more -- watering a steep slope makes it more likely to slide, not less, contrary to popular belief. And I wondered whether there was a solution that would be viable for small farmers, whose economic situation is usually pretty marginal. Then I remembered something I learned about the Aztecs in sixth grade, and it all came together.

I started out as an SF fan watching Star Trek, back when it was in its original run on NBC in the 60s. I have fuzzy memories of watching the show at home, and then playing Star Trek on the playground with a bunch of boys when I was in first grade. When I was in sixth grade, I discovered books about Star Trek, including The Making of Trouble with Tribbles, by David Gerrold. Tribbles was always one of my favorite episodes, and I've read some of Gerrold's other work over the years. Now, almost forty years later, I'm in an anthology with David Gerrold, who wrote the lead-off story for How to Save the World, and it's pretty awesome.

Reading through my copy, I remember some of the stories from the workshop, while others were new to me. They're all worth reading, and some of them are excellent. 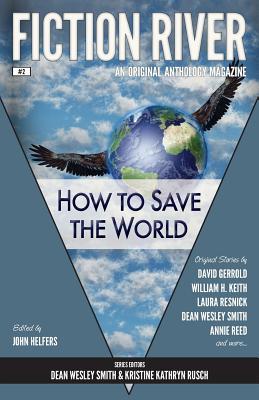 Very cool. Congrats. I remember the first time I was in an anthology with a writer I admired. That was something else. I liked Gerrold's Tribble stuff too. I haven't read a lot of his books but I do like his writing.

Yay! Congratulations! It's out!

Charles and Suzan -- thanks!