Jim and I spent yesterday (Sunday) at Wolf Mountain Sanctuary, in southern California in Lucerne Valley. Well, at the sanctuary, plus driving up and back with some friends; I think we spent at least half the day in the car. It was worth it, though.

Wolf Mountain is smaller than I was expecting, but Tonya, the woman who owns the place, said that they're working on moving to a larger property. They have several packs which have to be kept isolated from one another -- I got the impression that they might fight if they were kept together, although I might be mistaken -- so while they have several larger enclosures with room for the wolves to trot around and play and bury things, bigger would be better.

The enclosures are behind double fencing; you have to go through one level of chain link fence into a series of corridors which lead to the wolf enclosures themselves. Visitors who are just wandering around and don't necessarily have a staffer paying close attention to them can't stick fingers into the enclosures this way, or do anything else dumb. 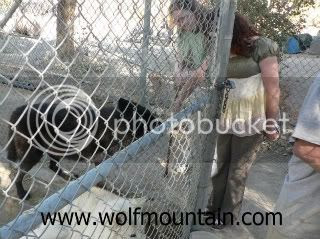 Once a staffer invited us back, he said that the thing to do is lay the back of your hand flat against the fence, so the wolves can sniff you. I'm there on the left; on the right is the friend who drove us, one of my husband's co-workers. Sometimes I got licked as well as sniffed, and sometimes they tried to rub the side of their head against my hand, although that wasn't very effective through the fence. Some of them would stand there, leaning against the fence, wanting scritchies, although that was kind of awkward too.

There was a huge group ahead of us -- about twenty or so people I think, so we just hung out waiting for them to finish. It was a shame in that that many people interacting with the wolves and giving them treats (chicken and turkey legs, dog cookies) got them tired and kind of full, but the good part was that after they left it was nice and quiet and we had the place to ourselves, the four of us. We were shown around and introduced to all of the wolves, told their names and where they came from. (All of which I promptly forgot, because my memory sucks and I didn't have anything to take notes with, so apologies for a lack of specifics.)

The wolves at the sanctuary were rescues of one sort or another. Sometimes people bred them and couldn't keep them anymore. Sometimes people bred them badly -- the dark wolf in the picture above, and a lighter brown mixed-color one in the same enclosure who's not in that picture, were siblings from the same litter, bred from parents who were siblings. That's not a great idea, but people do it anyway. There were other wolves at the sanctuary who were inbred also; Tonya said that one of them was aging more rapidly than he should, that he was twelve but looked more like a sixteen-year old wolf. People get wolves and think breeding them is cool, but don't learn about them or about how to do it properly. All the adult wolves at Wolf Mountain are fixed; the two siblings above are still considered puppies, and just a little over a year old, but they'll be neutered soon. There are barely resources to take care of the wolves they rescue from bad situations as it is; adding more by letting them breed would be irresponsible and Wolf Mountain doesn't do that.

Some of the wolves were rescues from Alaska, where dens were being burned out because wolves were supposedly taking game which "belonged" to sport hunters. The fact that wolves take the very old, the very young, the sick and the injured, none of which are interesting trophies to sport hunters, didn't seem to matter; they made a good try at eradicating the wolves from that area anyway. Wolf Mountain got some cubs rescued from dens in the targetted area. 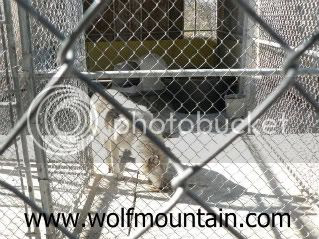 A few of the wolves were in smaller enclosures. Some of the wolves were waiting for a larger one to be built for them -- we could see the construction site off to one side -- but one was there because he'd had an injury and needed to be by himself for a while, and another was there because she'd been fighting with the others and needed to be isolated. The larger enclosures are ideal, of course, but the smaller ones were still a decent size for one wolf, and hopefully most of the wolves in them will be out soon. 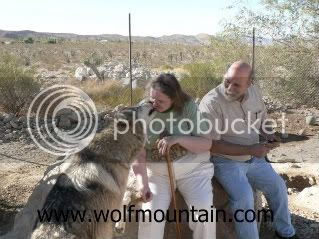 Because we were patient and quiet -- not difficult in comparison with the previous large and noisy group -- Tonya took us into one of the enclosures where she said she doesn't usually bring any of the visitors. Jim and I sat on a rock and the very handsome boy in the picture here came up to meet us. He wasn't terribly interested in the cookies -- we'd seen him burying a turkey leg earlier, so I guess he was full -- but I got some kisses anyway. That was pretty awesome. 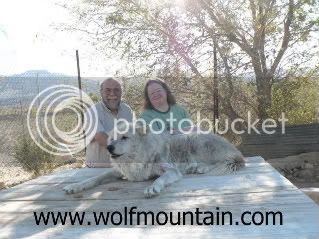 In one of the other enclosures, one of the wolves was kicking back on top of her platform. (I think it was a female.) You can't see in this picture, but they'd dug a den underneath this platform, which is boxy rather than just flat. I think a couple of the other platforms in other enclosures had dens underneath them too. Whenever we saw the wolves napping, though, they were always on top, or just on the ground somewhere. Maybe they went underneath at night? Anyway, this one had some cookies she was sort of mildly interested in (those are cookie bits in front of her in the pic) and we went up to pet her and give her some scritchies while she ate. I'd started at the base of her neck and was scratching fairly hard down her spine and had just hit her butt, just above the base of her tail. Most dogs like that a lot, and she seemed to think it was pretty cool too, judging by the look on her face. :) Her outer coat was coarse, not terribly soft to pet but good for moving through underbrush and shedding rain.

Oh, and someone did ask about the wolves digging out of the enclosures. Tonya said they bury the chain link four feet down, to prevent any escapes. She also mentioned that some of the wolves had once been frightened by a rabbit; wolves have to be taught to hunt, and if they're not then they have no clue where their food comes from. Keeping them in is as much for their own good as anyone else's. [grin]

This was a great day and we all had a wonderful time. I hope they do get to move to a larger property; I'm sure all the wolves would appreciate more running-around space. If you're ever in the area, check out their web site; you can make appointments for visiting from Thursday through Sunday. It costs $20 per person for a one-hour tour, or $50 for a half-day visit with a private tour, which is what we did. It was definitely worth it, and an awesome experience.

yeah, they are awesome critters, my namesakes ...and i hate that they are hunted/killed for no good reason GRRRRRRRRR

that lowlife, former alaskan governor, was one of the worst perpetrators!

LW -- I thought you'd like this one. :D And yes, they mentioned her in particular, and with some heat, but I made it more general because I wanted this post to be about the wolves, not her, no matter how much I'd love to see her fall down a glacier. [sigh]